For traditional publishers with a predominantly print-first workflow, the idea of going “digital first” is not only overwhelming, it’s downright radical. Even for those who attempt it, the result often looks like a print process masquerading as a digital-first one—where everything still revolves, ultimately, around the print product we call “an issue.” 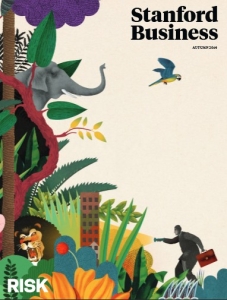 Stanford Business’ print magazine is built around a theme and pulls from content previously published online.

Two years ago, Stanford Graduate School of Business threw out the idea of an issue as we know it, dispensing with the notion that content should appear in print before being posted online. Editors even decided to let content live online long before being published in print. Whoa, right?

In his presentation, “Building a Digital-First Shop,” Freedman emphasized that his team didn’t set out with this or any other specific end goal in mind. In fact, what they set out to do was learn more—much more—about what the magazine’s readers wanted and to deliver that.

Here’s (some of) what they learned: 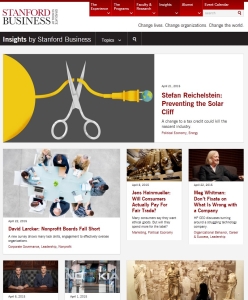 Microsite, Insights by Stanford Business, is the first stop for content.

Stanford Business staff analyzed its readers’ feedback, made sweeping changes, and ended up with a workflow that starts online. Freedman and his team first publish individual pieces to their website, Insights by Standard Business. Then, they post and promote content on social media, where they have attracted over a million followers. Next, content appears in the school’s email newsletter. Last but not least, some content is printed in the magazine, which mails to readers three times a year. The editorial team plans a theme for each issue and pulls together appropriate content from what has been published online. Each feature gets a fresh, print-focused design and a new headline.

How is the new process working? According to Freedman, the proof positive is a more engaged audience—both online and in print. Reader surveys and digital metrics tell them so.

Is Stanford Business’ strategy right for you? Maybe—but the takeaway is how the team arrived at its digital-first workflow. The process can be applied to any publishing organization struggling with how to balance the production of both print and digital. Here’s how to get started: